1. What should be the priorities of the DBpedia Association in the next year?

To overview the various priorities which were mentioned, the following digest illustrates the answers in four different groups. The most frequent answer was: to increase the data quality, followed by the enlargement of the DBpedia Community through broader dissemination.

2. What should be the priorities of the DBpedia Association in the next three years?

In contrast to question one, this one is based on the priorities the DBpedia Association focuses on during the next three years. As well as in the previous overview, the specified priorities are divided into four categories.

3. What is your main interest in DBpedia?

The chart above depicts the several main interests in DBpedia. The majority of participants have an “academic & professional” (45.7%) interest in DBpedia, followed by “professional” (28.6%) and “academic” (20.0%) interests. Only 2.9% of the answers are student-related interests.

4. How should the funds of the association be used?

With respects to “How should the funds of the association be used?”, most attendees chose “service provisioning”. The “development of new DBpedia features” was the second most popular choice. Nevertheless, also “Community building” and “release production” scored many votes.

5. How should the DBpedia Association collaborate with national/language chapters?

6. Should DBpedia open itself to contain and curate more data not directly extracted from Wikipedia?

As the chart above clearly depicts, more than half of the participants are in favor of DBpedia comprising datasets not directly derived or extracted from Wikipedia. In contrast, 34.3% have the oppositional opinion and appreciate  DBpedia focussing solely on data extraction from Wikipedia.

7. Which of the following features do you consider most important?

The following diagram gives a review of particular features and their importance from the participants point of view. As the result of question one reveals, data quality is considered the most important issue by the survey participants (23.7%). The second most important features, with 17.2% each, are: the provision of datasets extracted from the Wikipedia article text, substantial collaboration/integration with WikiData and a provision of better search, respectively an exploration of user interfaces. 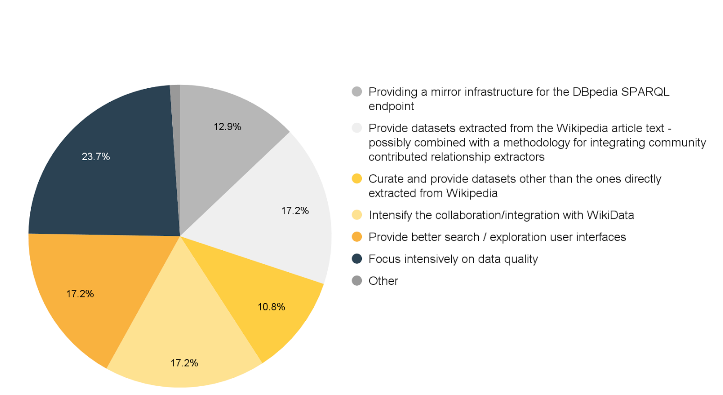 8. Any other question, feedback, opinion, ideas or suggestion you would like to send to the association.

Thank you for your input and your participation! Your priorities and opinions are of vital importance for the success of DBpedia in the future. We will discuss the implementation of your answers during our next DBpedia Board Meetings in order to find a reasonable strategic direction of the DBpedia Association for the next years.

Can Machine Translation be a ...