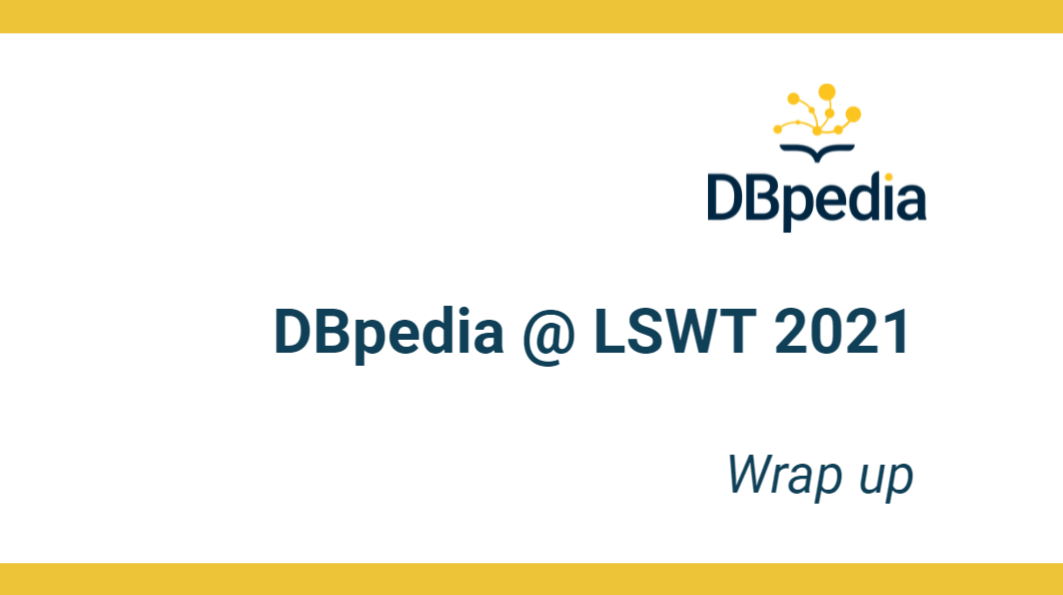 Last week was a fantastic week for DBpedia. On July 7, 2021 we gave 2 talks at the Leipzig Semantic Web Day (LSWT 2021). One day later we organized a DBpedia Tech Tutorial.

First and foremost, we would like to thank the LSWT organizing team for hosting these events. Following, we will give you a brief retrospective about the presentations. For further details of the tutorial follow the link to the slides.

Nathanael Arndt (AKSW / InfAI) opened the third session of the LSWT 2021 with a few welcoming words and information about the programme schedule. 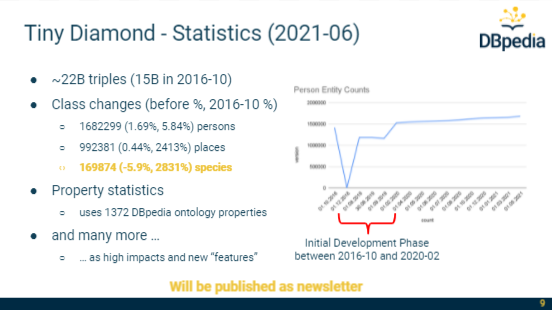 Marvin explained the differences between the latest core dataset and the snapshot edition – Tiny Diamond. The latest core data is online for 1 year and gets monthly updates of its contained dataset. It contains community extensions, developer debugging as well as rapid community reviewing. The DBpedia snapshot release is the same kind of data as the Latest core, contains the main content of DBpedia and is more stable and consistent. The next snapshot release will be published by end of July 2021. Check more details here.

Furthermore, Marvin introduced DBpedia Global, a more powerful kernel for LOD Cloud Knowledge Graph that ultimately strengthens the utility of Linked Data principles by adding more decentralization i.e., broadening the scope of Linked Data associated with DBpedia. It was released in June 2021 and you can read more details on the DBpedia blog. Finally, Marvin demonstrated that DBpedia Global can be used very visually with an example of Erich Schröger. To get more information feel free to check out the presentation here.

Following, Dennis Streitmatter (InfAI / DBpedia Association) explained how DBpedia Archivo can be used, especially in order of ontology FAIRness which aims to improve (re)usability. Therefore, he presented ways to find an ontology, how to access ontologies via an API, how to interoperate an ontology and how to reuse it. Speaking about interoperable ontologies, he also showed the star rating system, which is testing parsing, license and consistency for the ontologies usability. To get more information about DBpedia Archivo feel free to check out the presentation here.

As the last part of the session, Alex Winter (InfAI / DBpedia Association) and Maximilian Ressel (InfAI / DBpedia Association) presented DBpedia Live 2.0 which is a cool new API and is more flexible and usable than the recent DBpedia Live version. The goal of the project is to have an always up-to-date DBpedia Knowledge Graph. It started at the beginning of 2021 and it is only available in German and English, although they will adopt more languages. For the future they aim to find early adopters and gain first customers to further improve the service so it can be even more usable. To get more information about DBpedia Live, please go to the DBpedia website or check out the presentation here.

At the very end Nathanael closed the LSWT 2021 with some thank you words to all presentators, the audience as well as the co-organisators. The next LSWT will be part of a bigger event – the Data Week – which will also include a special DBpedia event. Stay tuned!

Jan Forberg (InfAI / DBpedia Association) opened the online tutorial with some general information about the program of the tutorial, the scope and the technical information.

DBpedia in a Nutshell and Getting Started with DBpedia sessions

After the opening, Jan continued with the first topic, the background on the DBpedia Association – how it all started and the evolution of DBpedia. The DBpedia Ontology was also addressed as well as the mappings, extractors and data groups (e.g. mappings, generic, text, wikidata). Jan concluded the first topic with information on the DBpedia Knowledge Graph Diamonds.

Getting Started with DBpedia session

In addition, Jan explained where to find data including DBpedia SPARQL endpoint, the DBpedia Databus platform as a repository for DBpedia and related datasets and the novel “collections” concept. Furthermore he demonstrated how to use the DBpedia data and the DBpedia Knowledge Graph. 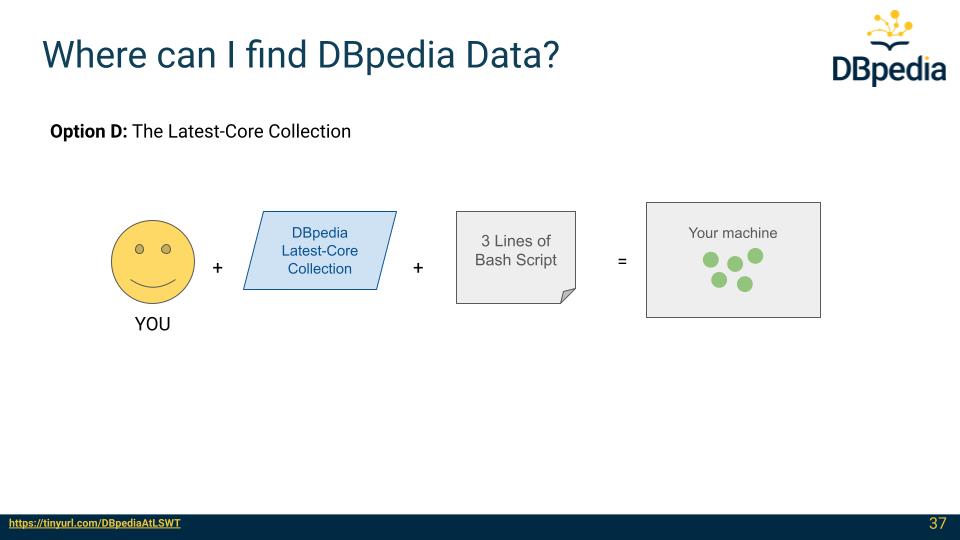 Fabian Götz (InfAI / DBpedia Association) opened the session with a talk about the DBpedia Databus platform. He explicated how the Databus platform works, the Databus SPARQL endpoints and the Web API as well as the Maven Plugin. After that, he presented dockersized services including DBpedia Virtuoso and the DBpedia Plugin, DBpedia Spotlight (incl. use cases) and DBpedia Lookup.

Afterwards, Marvin Hofer (InfAI / DBpedia Association) explained the DBpedia release process on the Databus and showed his work on debugging DBpedia and the DBpedia Mods technology. He also demonstrated the quality assurance process using the concept of  minidumps. Furthermore, the topics (Pre)fusion, ID management and the novel concept of cartridges were explained by him. 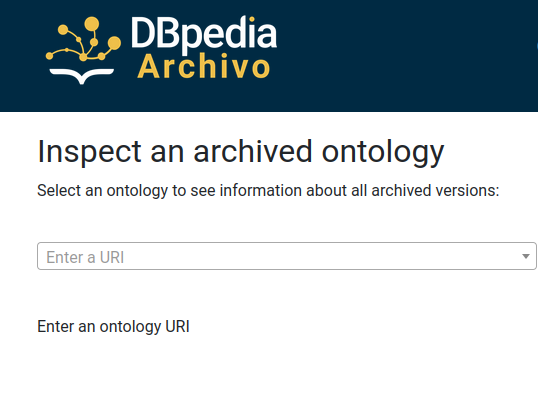 Subsequently, Denis Streitmatter (InfAI / DBpedia Association) presented the DBpedia Archivo ontology manager and how to include ontologies here. He showed various use cases, e.g. how to find ontology, how to test your ontology and how to back it up. Then he shared the ontology tests 4 star schema and the SHACL based tests for ontologies with the audience. Please read the official DBpedia Archivo call here.

Contributions to DBpedia and Outro

As it got to the end of the tutorial, Denis Streitmatter (InfAI / DBpedia Association) explained how to improve mappings or introduce new mappings. He talked about improvement of the DBpedia Information Extraction Framework as well as contributing to DBpedia tests. Afterwards, Marvin Hofer presented how to contribute to DBpedia by writing SHACL tests or by editing mappings. Finally, Jan Forberg closed the meeting by taking questions from the audience.

In case you missed the tutorial, our presentation is also available here. Further insights, feedback and photos about the event are available on Twitter (#DBpediaTutorial).

on behalf of the DBpedia Association