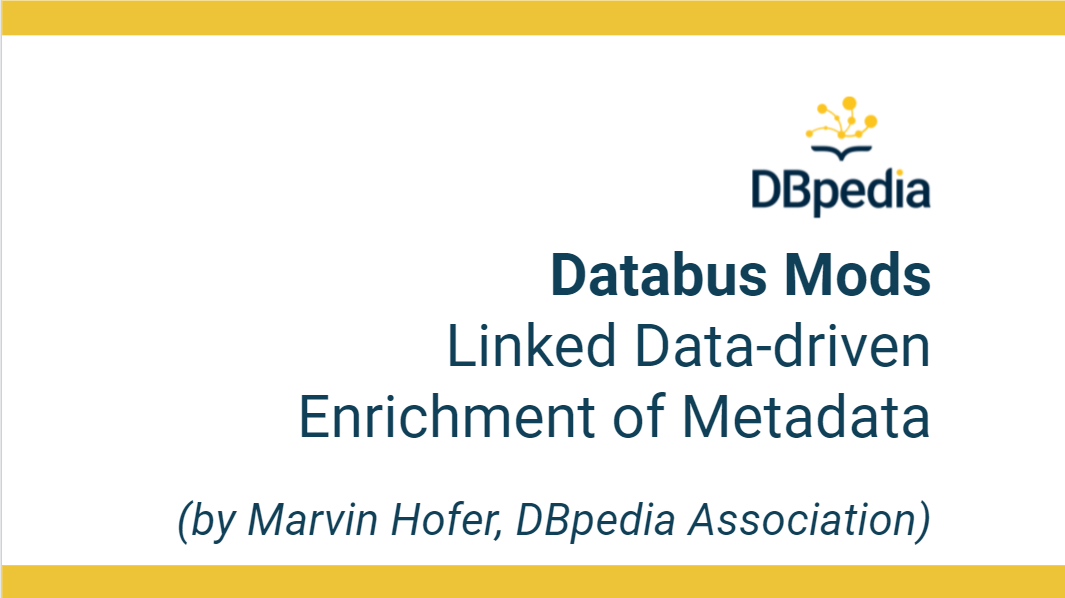 As a review, the DBpedia Databus is a digital factory platform that aims to support FAIRness by facilitating a registry of files (on the Web) using DataID metadata. In a broader perspective, the Databus is part of DBpedia’s Vision which aims to establish a FAIR Linked Data backbone by building an ecosystem using its stable identifiers as a central component. Currently, this ecosystem consists of the Databus file registry, DBpedia Archivo, and the DBpedia Global ID management.

As part of this vision, this article presents Databus Mods, a flexible metadata enrichment mechanism for files published on the Databus using Linked Data technologies.

These activities create provenance metadata based on PROV-O to link any generated metadata to the persistent Databus file identifiers, independent of its publisher. The generated metadata is provided in a SPARQL endpoint and an HTTP file server, increasing (meta)data discovery and access.

The Databus Mods Architecture implementation is provided in a public accessible GitHub repository, allowing other users to deploy their Mods reusing existing components. Further, the repository contains a maven library that can be used to create your own Mod Workers in JVM-like languages or validate the implementation of the so-called Mod API, which is necessary for the Mod Master to control a Mod Worker.

MIME-Type Mod. This essential Mod provides metadata for other applications or Mods about the specific MIME-Type of Databus files. The MIME-Type Mod analyzes every file on the Databus, sniffs on their data using Apache Tika, and generates metadata that assigns detected IANA Media Types to Databus file identifiers using the Mods metadata model.

VoID-Mod. The Vocabulary of Interlinked Datasets (VoID) is a popular metadata vocabulary to describe the content of Linked Datasets. The VoiD Mod generates statistics based on the RDF VoID vocabulary for RDF files. A major use case of the VoID Mod is to search for relevant RDF datasets by using the VoID Mod metadata. By writing federated queries, it is possible to filter files on the Databus that have to contain specific properties or classes.

Example: Federated query over VoID Mod Results and the DataID to retrieve Databus files containing RDF statements having dbo:birthDate as property or dbo:Person as type. The results are filtered by dct:version and dataid:account.

Databus Mods were created as part of my master’s thesis, which I submitted in spring 2021.

on behalf of the DBpedia Association